Time is flying. One months after WOC has already passed. I’ve had a lot of things to do after WOC, going almost right after that to ARDF World Championships in Bulgaria and then trying to catch up on Mathematics course that I’ve missed quite a lot. Now, when I’ve passed the exam, I want to finally do it, to write a story of a girl who was dreaming about achieving her biggest goal of the year and, maybe even a bit surprisingly to herself, she did it. I’m glad I appeared this girl.

I want to begin my narration from the occasion that happened to me when I was 14. At that moment I was for sure too young for being even a belarusian elite orienteer, but I’ve heard in a conversation that one woman, who was the strongest in Belarus at the moment, told someone: “That girl”, (pointing at me) “will one day not only beat all of us,” (in Belarus) “but also become one of the elite athletes in the world”. Of course, such things are difficult to forget. She smiled when I, at the age of 18, became the best orienteer in our country. And now it seems like the story continues. I have one more memory, but this time it was said by my father, who thought I’ll be ready to fight at elite level after the age of 23 (he was my the only coach till I turned 19 years old and watched me all this time, so why not to believe him?). I don’t know if it is a coincidence, but the bronze medal came right after I turned 23.

There are so many thoughts I want to write here, but I’m not sure I can do it in one time.

That was a difficult season with a lot of ups-and-downs, 2-month injury and gradual increase in training volume during all the June, the whole summer of nervousness and attempts to build orienteering self-confidence at least in sprint, because we didn’t really have time to do it in the forest. I really happy I had the support of my parents and my club all the time, but I’m really proud I had Sergey next to me all the time, helping me with my training schedule, being a pacemaker, standing my nervousness and trying to persuade me everything is going right. It seems he is the happiest person about the fact August passed. I hope he’ll be mentally ready for the next training cycle 🙂

It seems like I’ve finally found the key to my consciousness during orienteering performance (at least I hope so), what helped me to perform pretty good in the forest (except all the TV-controls, why am I so scared of cameras? I should obviously do something with that). I also think we’ve managed to do everything right with my training schedule before the Championships, cause I shouldn’t have thought about my speed in both sprint and forest disciplines, it just came naturally. The main focus was to be concentrated all the time. And I’m so happy I did it! (but actually not all, I’ve said about these shameful minutes of doing mistakes in front of all the TV audience…yeah, but now I should just accept that I did it and try to fix it).

If to tell a bit about every WOC event, I must say say the main goal was sprint. I’ve being studying the old map of the area pretty carefully, I did a lot of high-quality sprint trainings, I was ready mentally. Before we went to Strömstad, I had even put some nice clothes with me to walk in the city, just in case I’ll succeed in sprint. I also had even stronger motivation, I promised myself to buy 1kg of sweets if I won a medal. But actually, I decided that is not the healthiest thing to do and I should better skip it 🙂

I’ve started to become really nervous about sprint a couple of days before the event, even more nervous at that day. Calmness came only when I’ve started my warming-up before the sprint final. I suddenly realized I know all the girls around me, I had already competed with them. They were doing their ordinary routines before the start. I realized, it’s the ordinary competition, nothing special. I should do what I usually do.

Maybe I’ve started too fast, but why should I have done it in a different way. You should push right from the beginning, especially in sprint. I can say I did it pretty good till the long leg with uphill in the end. It seems I wasn’t really prepared for that, so I’ve started to do mistakes. It took some time to be able to push again and in the end of the course I’ve managed to do that. Finished with the first current time I knew I had 11 more girls behind me with almost all the favorites in there.

After Maja’s golden finish there was only Judith who was faster than me.My teammates showed me from the crowd that I most probably will be the third. That was like a dream, I was asking myself: “Has it really happened to me? Is it my name on the third position? Can it be a mistake?” No, it wasn’t. Before that day I thought that was something unreal, to be in top 3 orienteers in the world. I realized that was the moment I had been dreaming about and it became true, and also all my struggle during this season wasn’t for nothing, everything payed off. I won a medal, which was first ever medal in WOC for Belarus. Of course, that’s also something special to be first in something :). That’s why these feelings were even stronger. Day finished with a small cake and pleasant tiredness. Not too bad for the first day of the first championships! 🙂 But it’s not the whole story  of the girl, so, I can write here “to be continued…” 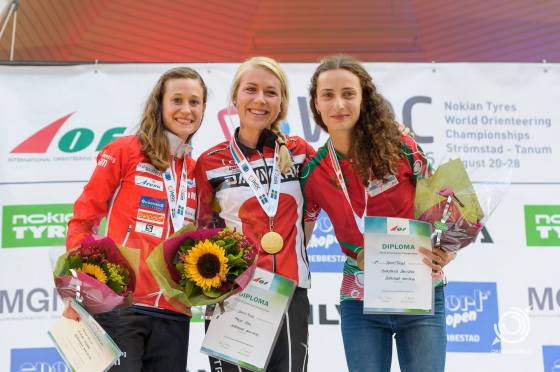